I attended my first deposition yesterday.

No, not that kind of deposition. 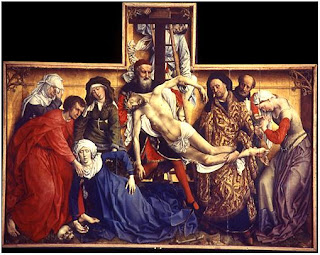 No, not that kind either.

It would be fun to describe it and give everyone a little taste of what the day was like, but I am too darn tired.

Actually, that pretty much describes it. 6 1/2 hours of detailed questioning and no food. (The rumor is true. Lawyers really do live on coffee. One more reason I'm just not cut out for law.) I was only there to take notes, charm the co-defense counsel and the client, and ensure that my boss knew when the deponent contradicted the records. Oh yeah, and to make sure the lawyers had enough coffee. It was interesting, though, and it was good practice. Apparently we'll be having an eight-day marathon of depositions for one of our cases in May. Gah.
Posted by Bethany at 9:09 PM 2 comments:

Today was a bit of a rough one, Sunday School-wise. The teacher was frazzled. The students were frazzling, each in their own special way. No one seemed to understand the lesson, but that might have been because no one could stop talking long enough to listen.

Assistant: God knows all about you. He counts every hair on your head.
Student: What if you have head lice?

Student: So, God knows, like, everything, right?
Assistant: That's right.
Student: (thinks for a moment) So, does Jesus like "What Not to Wear?"

I just know that if I was 60 years old and scary, this would not happen.
Posted by Bethany at 3:45 PM 6 comments:

"Whatever you do, don't look in the kitchen sink."

Our church held a potluck this afternoon to celebrate Dr. Evanson's visit.

The best thing about potlucks is that the food is brought in and our church family can enjoy lunch together without actually needing to use the church kitchen. Anyone who has seen our church kitchen will understand why this is a good thing. I don't even want to describe it because, well, it's scary down there.

There are, however, degrees of scary.
Loose plaster and cobwebbed pipes are one thing. Bats are another.

One of our friendly little church bats decided to pay the kitchen a visit and he ended up hanging out in the kitchen sink. He wasn't there for long. After entirely too many people had crammed into the kitchen to get a glimpse of the bat, my father came and "dealt with it."

There were some feigned tears and squealing on the part of the little girls who felt so sorry for the poor helpless little thing. "It's so cuuuuuuuuuuuute! Awwww Look at it! It's breeeeeeathing! Can it fly?!"
There were some relieved sighs on the part of the women. "I don't even want to think about it. Those things get in your hair. That's not something anyone wants to deal with. I'll be standing over here, out of the way. Let me know when it's safe to move."
Then there were the weirdos like my brothers and me. "Awesome! No, let me get a closer look. Gross. But cool! Eine Fledermaus-- right Sis? Look at the claws. I wonder if it was hibernating in here? Andrew, get back. It's rabid. You can see it in its eyes.*"

I suppose it's too late now to tell my dad that he "dealt with" an endangered animal.

I was tired of the old look. I'm at home sick. It's cold outside. Hence the new look.
Posted by Bethany at 1:45 PM 2 comments: