Apparently I have been tagged by my mother, and also by Not Worthy. I like this one...anything that requires talking about books sounds good to me!

1. One book that changed your life: I'm going to be like my mother and not give the obvious answer (The Bible.) I think I'll have to say Anne of Green Gables. It is largely responsible for making me a goofy, overly-romantic, poetry-reading, girly girl, prone to fits of nostalgia. ;o)

3. One book you'd want on a desert island: The Bible

4. One book that made you laugh: Most books make me laugh, at some point. I'll agree with my mother and say Life with Jeeves 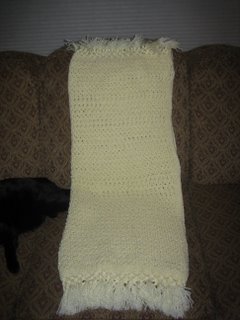 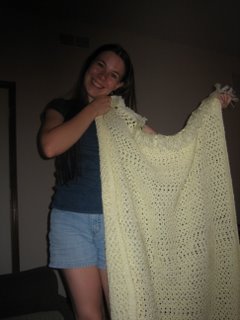 Here it is...the finished project, under construction for just about a month and now FINISHED.

This was my first real knitting project, since I don't count misshapen doll-scarves as anything real. :o)

Now that I am done with the blanket, I can get on to my next, slightly less challenging project- making scarves for allllll my little girl cousins!
Posted by Bethany at 10:06 PM 6 comments:

I decided to join the photo scavenger-hunt blog, just like my mother. :o) The theme for today is "Blue." 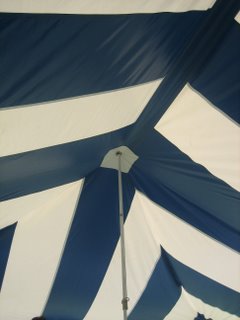 This was the tent at Katie and Nathan's wedding reception. I liked the blue and white-ness, which reminded me of the Greek flag. Not that that has anything to do with anything....
Posted by Bethany at 11:42 AM No comments:

School is starting in the morning for me. I've been looking forward to the start of school for weeks, but now that it is actually here, I'm wishing that todday could drag on and on! It doesn't help that the weather has been completely gorgeous for the last few days, and I spent the entire afternoon sitting outside and reading. After a nice relaxing day like this, 4 months of papers, german homework, and actually doing (gasp) math just doesn't sound appealing.

I know that by tomorrow evening, once I have my syllabi in hand and have seen some of my school friends I'll be happier about the whole thing.

Now, I'm going to go watch a movie with Andrew and enjoy my last day of complete freedom for the summer.
Posted by Bethany at 5:30 PM No comments:

I am officially a wimp...

...I suspected as much before, but it has been proven.

One of the problems with having all my boys out of the country for more than a week, is that the grass does not stop growing in their absence. The lawn needed to be mowed the day before the guys left, and Patrick "forgot" to do it. It's been several days now, and our lawn is decidedly scraggley.

My mother and I decided that it would make sense for me to just buck up and do some physical labor, rather than paying someone else to come do the lawn. We knew that the job would be difficult. Our mower used to be self-propelled, but at some point that function disappeared, leaving us with an extra-heavy push-mower. I, however, didn't grow up with three brothers for nothing, so I headed outside this morning, thinking to myself, "If they can do it, I can do it."

I have been disillusioned.

I made it through about 1/5 of our yard before giving up, my wrists aching and my head about to pop. I came stumbling into the house, and my mother decided that it was time to give up and call someone else. Now, I am sitting in a comfy chair, freshly showered and wearing my girly-girliest skirt, with a new appreciation of Patrick, who has to wrestle with that mower on a regular basis.
Posted by Bethany at 10:14 AM 8 comments:

For the next 9 days, our house will be guy-free. (With the exception of the he-cat, Ben.) My father and brothers left at 6:30 this morning for their annual fishing trip in Canada.

My littlest brother Andrew is going for the first time this year, and he was thrilled to be going. He gets to be one of "the men" for a week, and the fact that there will be no bathing all week is just gravy. (Smelly gravy, if you ask me.) What I don't think he realized is that this week also entails hours and hours in a dirty boat, waiting for the silly little fishies to bite. He also doesn't comprehend the idea of "no running water" or "spider-infested outhouse." The darling little arachnophobe may have a nervous breakdown. Or, he might just find that he enjoys being a filthy little hooligan.

Patrick, who has gone every year since he was 7, is completely aware of what a week at the cabin entails. He spent the last week detailing for me so that, even though I have never gone and never will go, I have a rough idea of what he was facing. I don't think he was looking forward to his week in the wild. He's the sort of civilized person who thinks that fish is best when served as part of sushi, and that his sister is better company than giant mosquitos.

The person who this trip really suits is Jonathan. Not bathing, sitting around doing nothing, and being generally uncivilized fit him better. He's more the typical young ruffian. He likes spitting and urinating out of doors.

They all, however, were looking forward to spending a full week of uninterrupted time with our father, away from his usual concerns.

And, as for my mother and I, we are enjoying our girl time. Today was spent shopping, eating out, and seeing Pirates of the Caribbean once again. I know she misses the boys already, and I'm sure that, by next Sunday, I'll be ready to see them too. Just as soon as they have showered.
Posted by Bethany at 10:43 PM No comments: 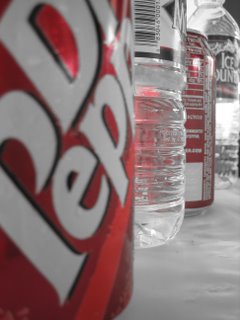 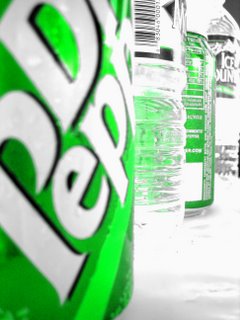 This is what happens when I have too much time on my hands and a nice camera.

Those of you who were at The Wedding (;o)) might recognize the picture on the left. I guess I just couldn't leave it alone.

Dr. Pepper gets a makeover.

Posted by Bethany at 1:16 PM No comments: