We went to Buskerfest in downtown Fort Wayne this evening. It was sort of my suggestion, so I felt responsible for us having a good time. There wasn't a whole lot to do, exactly, but there were some interesting things to see.

--The Fort Wayne Hip Hop Crew: Yes, Fort Wayne has a hip-hop dance collective. (No info online yet, but one wicked awesome "website under construction" page.)  They drew the largest crowd, so I wasn't really able to see the dancers until near the end.  It was then that my father pointed out that they were reflected in a few angled windows of the nearest high rise.
--Juggling giraffes: Yeah. Involving stilts.
--Foo Fighter Wanna-be live music: He really wasn't bad, but he was trying so very hard to sound like every other growly derivative indie/alternative rocker.  But then, it was hard to hear him over the music blasting over the local pop station's speakers. Pink, All American Rejects, The Fray. Totally not busker worthy.
--Flute girl: She seemed a little out of place, playing her Mozart sonatas (trying to drown out both the live singer AND  Pink on her own) and her flute was a little shrill, but she had some serious skills.  Give that girl an alto flute and a concert hall.
--THE MIME: . . . .
--Rhythmic Dancer-Lady:  First, I almost ran into her.  That could have been 1) embarrassing and 2) dangerous.  She looked ferocious.  I was going to say that she looked like a failed ballerina, but then I shouldn't make fun of failed ballerinas.  I would give a heck of a lot to be any sort of ballerina, failed or otherwise.
--Gardener Statue:  This guy was what I think of when I think of buskers (and you know I think of them all the time).  He was doing the human statue routine and really confusing the poor little kids who gathered around him.  The funny thing is that he looked a lot like my Uncle Sean.... I actually have a picture of him posing as a statue.
The best part of it all was just seeing all the people downtown.  It was a gorgeous evening and, besides Buskerfest, there was a TinCaps game going.  The restaurants were packed and the sidewalks were full of people out enjoying the evening.
I just can't believe I didn't have my camera along. 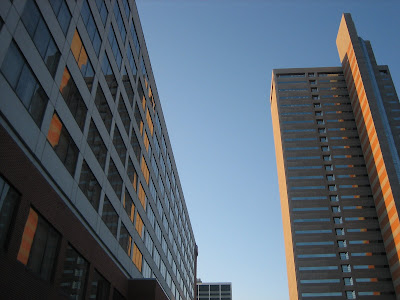 For your reading pleasure....

I had an urge this evening to go through one of the boxes under my bed.  I tend to be a bit of a nostalgic pack rat-- I hate getting rid of things that could potentially possibly at some point in the future remind me of that time I did that thing with that person.  I have managed to pare my hoard down to two medium-size rubbermaid boxes that fit under my bed.  I pulled one of those out just to remind myself of what was in it and see if there was anything I could finally let go of.
I have to say, I refound some pretty special stuff.
Like this gem (oh Rachael, I hope you read this), vintage 2004.  Double points if anyone can tell what on earth we were thinking.
PEYES Case File One (or, "Watch Out for that Iceberg")
By Agatha Holmes [aka the brilliant and beautiful Bethany Casey and Rachael Soyk]
A Good Old-Fashioned Serial
First Installment--
It was a normal day in the office.  Not that any day is normal, mind you... not for the PEYES.  (That's Police Investigators, for the uninformed.  We decided against going into the private sector, seeing as how this way we have the FBI, CIA, and those dudes in the black suits and dark shades at our beck and call. Someday we'll figure out who they are and when we do, we'll take a nice long vacation in the Caribbean, where we'll drink all the rum.  And the rum will be gone.)  But we digress... something we plan to do quite frequently.
It was a normal day in the office.  Then it happened!  One of those dudes in the black suits and dark shades walked in, slamming the door behind him.  He didn't take off his glasses, regardless of the fact that the office was ridiculously dim, being lit only by a single candle.  (We forgot to pay the electric bill, having been in attendance at the King of Denmark's wedding.  Charming affair, that.)  But we digress.... again.
He pulled a plain manilla envelope out of his jacket and tossed it onto the desk in front of us.  We opened it.  Inside were some black and white photos.  The first was of an unremarkable looking older man with close set eyes.  He looked oddly familiar, but we couldn't think why.  The second was of a large ocean liner with the word, "Titanic" written across the side.  The third was of a friendly looking sea-captain.  The fourth was of a strange figure, cloaked and riding some sort of disturbing creature.  It reminded us of a certain pink dragon thing that befriended a little boy. (Very cuddly looking, unlike the disturbing creature.)  But we digress yet again.
The fifth photo was of the captain again, this time dressed in kingly robes and not looking quite so friendly.  The sixth (and thankfully, the final) photo was the strangest by far.  Six hundred sixty-six wooly mammoths were shoving huge chunks of ice into a frigid looking ocean.  (We also noted a little squirrel carrying an armload of nuts, not realizing he was about to step into the ocean.  Maybe he hadn't seen the light.  Can I hear an hallelujah?)  Again we digress.
We looked at the man in the black suit and ridiculous dark shades for an explanation.  He began, "The King has just been slain by the Fell Beast.  The King is also this captain, in a parallel universe.  We have reason to believe that something dreadful may happen to this ocean liner.  The captain must die within twenty-four hours or time and space will be torn apart and everything we know will cease to exist."  He pointed to the first picture.  "A rogue agent of the CIA, Jack Bristow, has taken it upon himself to ensure the captain's demise.  He, with the help of these 666 wooly mammoths, is setting a trap for the ocean liner, The Titanic.  Using technology acquired from the Russian Mafia he will guide at least one of these icebergs into the path of the Titanic.  Unfortunately, we disagree with his methods.  It is your job to find the captain and warn him so that he can avoid the icebergs.  Get going.  You have a lot of work to do.
To be continued. . . .
Of course, the story never resolved. Really, though, we set our main characters up for failure (yes, I'll give it away--the Titanic did sink), so it couldn't have had a very satisfying ending.
Posted by Bethany at 8:22 PM 3 comments:

I was grumbling to myself today at work about so many different things.  My two greatest complaints, however, were 1) that I didn't have enough to do and was soooo bored and 2) that it was freaking cold in that office.  Seriously... I spent the day taking breaks from typing to chafe

my hands. My coworkers should be thankful that I am constitutionally disinclined to go out of my way to talk to people, because I was having a cranky day today.
So, 3:30 rolled around and I could feel the end of the day coming.... And my boss called me in for a conference in her office about one of our cases. I came out 45 minutes later (with 45 minutes left to go before the end of the day) with piles and piles of very urgent, very important things to do. Problem #1 solved--boredom banished. I ended up staying an hour late to get a head start on the most time sensitive projects. (Staying behind after everyone else has left is quite an eerie experience. I swear the chairs in the other--empty--offices were rolling around. And I thought I heard someone cough.)
Now I'm going to go on a long walk, which should solve problem #2 and banish my snarkyness.
Posted by Bethany at 5:25 PM No comments:

The danger of word games.
Note to anyone who doesn't know any better: That's The Onion.  It's not serious and it isn't real news.
Posted by Bethany at 7:48 PM No comments: 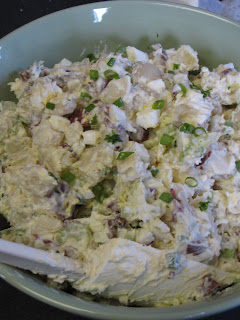 My mother and I spent quite a bit of time playing in the kitchen this afternoon and evening.  Of course, we had to play with our blueberries.  Yesterday, they turned into boy bait.  Today, we teamed up to make a really nice blueberry cobbler and my mother froze several quarts of berries.
We also made up a recipe for potato salad. Actually, my mother did most of the creative recipe creation; I just chopped and stirred. 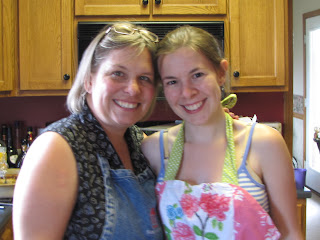 I already posted this on facebook, but it was just too good not to share again.
Blueberry Boy Bait cake.
I more than doubled the blueberries and cinnamon ('cause you just can't have too much of either).  The end result is moist and oh so buttery. Mmmmm.
I think I'll go hide the leftovers.
NOTE: If anyone wants to know, NO, I did not catch a boy with my boy bait cake. Not a bad idea, though.
Posted by Bethany at 10:45 PM No comments:

It feels like such a waste to leave this perfectly good blog sitting here, lonely and ignored.
I'm discovering why people like to make such a big deal out of "The Weekend." As a kid, I never really noticed the weekends.  It went along with being homeschooled, I suppose. Our routine on Saturday was pretty much the same as it was during the rest of the week, but we'd see that Dad guy a little more and my brothers and I might be roped into some crazy scheme that involved weeding the garden or looking for Daddy's missing toolbox.  And, of course there was church on Sunday. Otherwise, the weekend wasn't much different from the weekdays that followed and preceded it.
When I started at IPFW and got my job at the library, the weekend became 1) time to write as many papers as possible or 2) time to fit in my 10 hours of tax-payer funded drudgery.  I could never consider relaxing on the weekends if there was any school assignment due in the next two weeks; I needed to get that school work done before I could even think about fun or rest. And work was just boring.
Now, I finally get it. Having a full-time 9:00 to 5:00 type job, I start looking forward to the weekend starting Sunday night. It isn't like my job is tortuous, and in fact I enjoy it most of the time. BUT, on the weekends I don't have to be asleep before 10:00, which means I have time to watch movies and eat ice-cream with my family after dinner. I also don't have to wake up to a squawking alarm at 6:20am. I have plenty of time to read AND dig around in the garden with my mother (or go blueberry picking, as we did today).
Incidentally, I've found that writing really truly boring things at work makes me want to write fun things when I'm at home.  I know I've said it before, but I really do plan on making more use of this blog. It's either this, or I talk my mother's ears off every evening.
Posted by Bethany at 8:35 PM 2 comments: