Be prepared.... When I am really tired I either get completely witless or I turn introspective and philosophical. Tonight, it is the latter.


I have a confession to make.

I laugh at people. Hair, clothes or lack thereof, habits, and cliche-ridden speech patterns are all fair game. Perhaps it is the result of reading Pride and Prejudice a few too many times and trying to emulate Elizabeth Bennet, but I love absurdities and quirks. 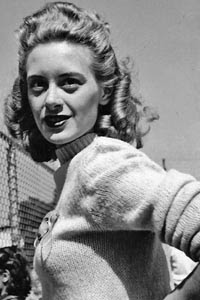 Perhaps that will explain why the last two days seemed a little strange. It started yesterday afternoon while I was at work. My boss had assigned me to stick labels to a bunch of our microfilm cabinets, so I spent 5 hours sitting at a table in the back of the department, sticking tape on the backs of the labels, and being bored out of my mind. While I was thus engaged, a lady who appeared to be in her late-seventies walked in, wearing the old-genealogy-lady uniform (colored capris, T-shirt from Walmart, and white tennis shoes). Her face wasn't remarkable- it was rather worn-looking, but very soft. What set her apart was her hair. It was dyed a very light yellow-blond and curled and teased into something resembling this 40s style. She had combed it flat over the crown of her head and there was much more scalp than hair visible.

The overall effect was quite grotesque, but it didn't amuse me as I would have expected. Instead I was deeply saddened. Something about that old women and her hair really caught me. Perhaps it was because she was trying so hard to recapture something that is obviously gone forever- she will never be young again, her hair will never again be thick or naturally blond. Suddenly the genealogical records on the shelf next to me seemed completely different, as though all of the people listed in them had been personified in that one woman. Sitting there, bored out of my mind, it really hit me that the same thing will happen to me, to my parents, and to all of the people I love. This 20 year old was suddenly facing the reality of mortality, with even more force and awareness than at my great-grandparents funerals, when the emotion seemed to act as a buffer.

As I sat there thinking (still taping labels), I also realized just how comforting it is to know that, even should I become grotesque and ridiculous with old age, and my already flawed and weak body become flawed and weaker still, I can rely on Christ, who feeds me with his own perfect body and blood. When death comes for me, as it already has for so many, I will not remain as I was but be joined with Christ in Heaven, where I will be given a new and perfected body which will never grow old or bald or require Walmart t-shirts and old-lady shoes.
Posted by Bethany at 8:41 PM 3 comments:

I just wanted to share my amazing accomplishment with everyone. At work this evening, I shelved 1000 books (plus 50 rolls of microfilm) in under 6 hours. I am pretty impressed, especially since our boss told everyone that 100 books an hour was the goal.

Apparently my blog is in imminent danger of being hacked and deleted unless I start writing. Since I am tired, far too slap-happy write anything legible (let alone intelligent), and just a little cranky, I thought that I would just share something truely inspiring.

My mother and I have a weekly ritual. One of us will pull the birth announcements from the Fort Wayne paper and we will read the names aloud, sometimes spelling out the most impossible and ridiculous ones. My personal favorites this week were twins Xamir Asante and Sebastian Amadeus. I can't decide which one I would rather be. It could be worse, though. There was someone in there with the middle name Nimrod. I realize that it is a real name, but all I can hear is Bugs Bunny saying, "What a nimrod...."

Or, there's little Uriyah Danyell. Uriyah, pronounced like, Uriah the Hittite, except that Uriyah is a girl. I was so moved by that name that I decided I would name my first daughter Zebedee, but (since all letters and sounds are now interchangeable) I would spell it Xebydii. Isn't it cute???
In case anyone had any doubts, that was completely facetious.

I can't decide whether it would be worse to be a Jaiyr who will go through life with a name no one can spell, or a Caiden/Kaiden/Kayden/Kaedyn/etc. who will be in a class full of boys and girls whose names are all pronounced exactly the same.


Incidently, this is way fun. Just explore.
Posted by Bethany at 9:34 PM 2 comments: