A political message I can get behind

I'd really love one of these T-shirts.
Posted by Bethany at 8:34 PM 1 comment:

I have to admit, my little strict constructionist heart skipped a few beats when I read this gem:

"A constitutional guarantee subject to future

judges’ assessments of its usefulness is no constitutional

guarantee at all. Constitutional rights are enshrined with

the scope they were understood to have when the people

adopted them, whether or not future legislatures or (yes)

even future judges think that scope too broad."

What was I thinking?

At the moment, I have a rather large stack of books waiting to be read. I did some browsing at the library last week and picked out a few books that caught my eye. The first one is "London Rising" by Leo Hollis, which is about the impact of men like John Locke and Sir Christopher Wren on modern London. (Well, I think it looks interesting.....) I also grabbed a set of essays on the Gilded Age. I don't feel the need to plow through it like a novel, but some of the sections looked really interesting. My mother also just purchased "Albion's Seed", a book that I have been wanting to read for a few years, but have been too intimidated to try...1000+ pages of Anglo-American cultural history. Nothing like some nice light reading for those summer months, eh?

No, nothing like light reading. The first book on my list, and the one I am working on right now, is "Crime and Punishment." I don't know if "enjoyment" is the correct word for my experience so far, but it is nowhere near as painful as I had been led to believe. I figured that since I loved "The Brothers Karamazov" I might as well try this also.

After finishing these books, I will have temporarily lost the ability to read all but the fluffiest of fluffy chick-lit and will be reduced to sitting out in the sun shine giving my poor overtaxed mind a vacation. Another less impressive pile of library books will replace the current very ambitious pile and I will begin saving up mental energy for another intellectual binge.
Posted by Bethany at 10:30 PM 2 comments:

I did something for the first time today. Something I have been tempted to do many times but never actually gotten the guts to do.

I walked out of a class.

Granted, it was during a break in the middle of class, not while the professor was talking, but there was no way I could stand to sit in that class and listen for another hour.

Today's class was on "population ecology" which apparently translates to "population growth." The professor showed graph after graph of population statistics, all of them semi-apocalyptic and predicting the end of the world if people have the nerve to keep reproducing. This was annoying, to say the least. The professor insisted that, at a birthrate of 1 child per couple (let alone the replacement rate of 2.0), the population will continue to grow out of control because, "the old people aren't dying." Now, is it just me, or does the very phrase "replacement rate" imply that the population is merely being replaced? Not increased? Oh, and how about the fact that EVERYONE dies?

As my professor says, "Reality doesn't have to apply exactly directly." Come on. What do you think this is? Science?

That wasn't what made me walk out, though. After learning about explosive, uncontrollable, exponential population growth, he turned to population control. After showing vital stats for a few different countries, he started talking about the necessity of the birth rate falling to match the death rate or the death rate rising to meet the birth rate. Our choice (as explained by Mr. Science) is either that reproduction be stringently controlled or more people die (but he didn't let us in on the secret of HOW this is to be accomplished.) He then proceeded to tell us that it is much better that more humans never be born because otherwise they will have to suffer. When asked to clarify his position--if he was really saying babies should never be born--he sort of smiled, mumbled a little and said, "Yes, that's right."

After we were given a break (and grabbed our backpacks and ran away) I was able to watch my seminarian/philosopher friends go off on the idiocy we had just been subjected to.

Coincidentally, Laura Ingrahm on FoxNews talked about this very issue this evening. She had a proponent of "population stabilization" on to discuss it. He was also unable to explain exactly how this should be brought about. The main problem in, in his mind, seemed to be the growth in the American population. He used it as an example of overpopulation everywhere, which made some sense until he pointed to immigration as the driving factor behind US growth. Now hang on, but can growth via immigration really be factored into global population growth? Did those immigrants not exist before they crossed the border?
Posted by Bethany at 4:33 PM 1 comment: 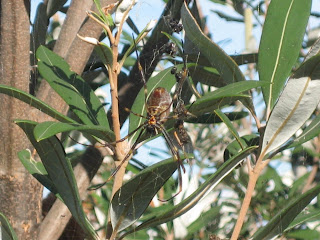 I have a theory-- it seems that the disgustingness of an insect or spider is directly proportional to the beauty of the flower near which it is living. I noticed this again this evening while tending our roses. Every time I found myself admiring one of our plants, I would also find myself suddenly disgusted by some creepy-crawly that had made itself at home on said plant.

(And no, the dude in the picture there was not in the garden tonight. He is either long dead or still stranded on a very large island on the other side of the world where he passes his time eating large bugs and small children.)
Posted by Bethany at 8:27 PM 1 comment:

Our family got a Y Membership last month, and my father and Andrew have been making very good use of it. Andrew has decided that he really enjoys working out on the equipment and would spend all of his time there if he was allowed. I just know that, before too long, my short, silly, scrawny baby brother is going to be tall and (as he puts it) "super buff." I'm scared and disturbed by the thought.

Today I finally made use of my membership. My mother, father, and Andrew met me over there after I got off of work and we went swimming. I hadn't been swimming in ages. I honestly can't remember the last time I was in a real pool. It showed. I tried to do a breaststroke and it looked (and felt) like I was drowning. I only ran into the wall once (...or twice), I whacked my hands on the lane markers hard enough to raise welts three times, I kicked someone twice, and there were a few moments when I thought that I was going to perish with toe-cramps. Did I mention that I don't swim often? My mother and I are planning to make swimming trips part of our "normal" routine, and I can only hope that, with practice, I won't be such a danger to myself and others!

Speaking of dangerous activities, I'm going miniature golfing with the other genealogy shelvers tomorrow afternoon. We did this last summer and had a great time together. It's a slightly different crowd this year and several of the really fun people are gone, but it should still be enjoyable. We're doing Steak'n'Shake for lunch afterwards. This, when I should be at home (A) making my father feel properly appreciated or (B) studying for the two biology tests I have on Tuesday (one class, two tests- go figure!)
Posted by Bethany at 10:08 PM 1 comment:

This Girl's Brain Needs Some Exercise

For the first time in months, I actually feel like posting on my blog. It's amazing. Even more than feeling like writing something, I feel like having the discipline that comes with writing something every few days. It feels good to be in the habit of putting my thoughts into words (even when those thoughts are woefully uninteresting or just plain silly.) In the weeks since school finished, I feel like my brain is turning to mush and some stimulation is necessary.

Granted, I am taking a six-week biology class and lab at IPFW and that should be inciting some mental activity. Hah. Verbal jousting with my Catholic seminarian lab partners is about as close as I have gotten to real thought in that class. With 2 weeks left in the class, things should be getting more interesting. We'll be dissecting fetal pigs next week, which HAS to be more interesting than looking at dead amoebas under a weak microscope, cultivating jars of some guy's spit, or counting how many wrinkled kernels are on a 40 year-old ear of corn.

I have really enjoyed the chance to do some recreational reading. My last semester was quite book-heavy, so it has been nice to read whatever I want at whatever pace I want. I discovered Stephenie Meyer's Twilight series a few weeks ago and finished them each in a few hours. Good, but they certainly didn't last long enough. I also had my first experience with Henry James this week. I was stranded at work with nothing to read but, (one of the few perks of working at the library) I was able to run downstairs and pick something up. I read The Turn of the Screw and Daisy Miller, both of which were fairly enjoyable, though I found James' style rather aggravating at first.

I have also been making an effort to really enjoy the warm weather. I have a tendency to get grumpy when I'm too warm, but I keep reminding myself that I waited MONTHS for it to be warm, and I should enjoy it for the very few months that it lasts. And I really do love the feeling of being nice and warm. The sensation of the warm air after being in an air-conditioned building (and vice-versa!) is wonderful, cold water suddenly seems miraculous when you have been outside working in the garden, and I have discovered that I am unable to drive through town with my windows up...they all must be rolled down, and my music must be turned all the way up.
Posted by Bethany at 5:26 PM No comments: