I'm sitting in my grandparents' living room right now, having chopped **9** cups of celery in preparation for the best stuffing in the entire world. My grandmother's stuffing is legendary.... People start dreaming about it on the day after Thanksgiving and crave it all year. It makes chopping cups and cups of briny water chestnuts bearable.
Posted by Bethany at 9:32 AM 3 comments: 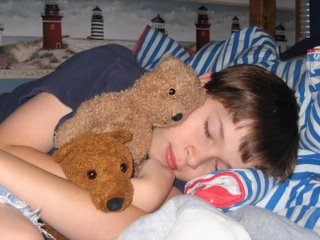 This is my little brother, cuddling with his bears Toby Keith and Firebreath. (Yes, those are the names he gave them.)
Posted by Bethany at 10:04 AM 13 comments:

I changed my mind

I do have the brain power to write something.

I spent the entire day today in my pajamas. I didn't have school, work, or anything responsible to do, so I vegged. In this case, vegging meant entering 336 books into my Library Thing account (that would be Rachel's fault.) It was nice to just relax and waste an entire day. I've been so very useful lately, and it was starting to catch up with me. ;o)

I'm getting ready to start on my final paper for the semester. It's for my 20th Century class, and I'm writing it on government-sponsored eugenics and social engineering. As I'm sure you can guess, it's going to be a very uplifting paper...almost as uplifting as the one I wrote last year on physician-assisted suicide. I honestly don't know what makes me choose such dreadful topics. Maybe I should have a talk with my psychology professor.....

My history class has been really interesting lately, mostly because our discussions keep going off topic, so that when we're supposed to be discussing communist China, we're actually having a philosophical discussion on human rights, which morphs into isolationism v. internationalism, which somehow turns into a discussion of why we hate Wal-Mart (and not for the usual PC reasons.) Somehow, with all of that going on, we still manage to learn about Communist China. And, on one in the class, including the professor, tries to argue in favor of Communism or Socialism

Of course, there are some of the usual flakey people involved in the discussions...the sort who try to tell the class that everyone in America hates the US military, and that all good Americans should move to Australia. Apparently Canada is no longer an option... something about Canadians being too American.

My American history class is quite different. For the two weeks we've had the pleasure of hearing the professor rhapsodize over Johnson's Great Society and whine about the evil Vietnam veterans and all the problems they caused for us. We're talking about Nixon on Tuesday, which should be... interesting.
Posted by Bethany at 7:08 PM 4 comments:

...and I'm lacking the brain power to actually write something:

One of my very favorite people now has a blog, and I am CERTAIN that it will be very interesting when he gets around to posting on it.

Patrick's Gallimaufry is the blog, and if you couldn't guess, it is my weird and wonderful little brother.
Posted by Bethany at 1:39 PM 2 comments:

This is what your taxes pay for

I am now officially a government employee.

Please, no one disown me.

I started today at my job as a shelver in the genealogy department of our library. I'll be working 10 hours a week, and after my first 5 hour shift, I'm exhausted. My legs and arms are sooo very tired, but they feel good. A few weeks doing this and I'll be in good shape!

My coworkers seem very friendly and gave me lots of advice and help today.

If you can't tell, I'm tired AND excited, which leads to semi-incoherent writing. Good thing I don't have any papers to write tonight.
Posted by Bethany at 8:40 PM 1 comment: